What to do on a rainy afternoon in June….Drink Beer!

Our second annual World Tour of Beer at the Horse was another resounding success, albeit, a more subdued and dignified affair this year with the soothing guitar of local NPR celeb John Floridis and 26 true beer afficianados huddled over their note cards and Angus Sliders. The pros from Rocky Mountain Wine Distributors pulled out some exquisite and hard to find beers from Europe, California, Pennsylvania and South America – 14 in all were served along with a table laden with the efforts of our new “Kitchen Slave”, Andrea Wight. 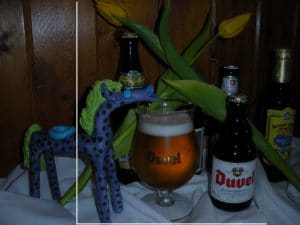 This horse loves the Belgian Duvel!

she has been slaving away in the kitchen learning our menu and creating some wonderful new dishes drawing on her recent experiences at Caneel Bay in St. John  and Zola’s in State College PA.)

Andrea spent the afternoon turning out an array of canapes that would make any beer drinker salivate…Beer Battered Mushrooms with Chipotle Dipping Sauce, Angus Sliders with Arugula and Horseradish Cream, Poached Shrimp, Smoked Salmon and Dill Cucumbers, Classic BBQ Wings, Ahi Sashime with Wasabi Ginger Sauce and the piece de resistance…bittersweet chocolate and raspberry truffle squares to accompany the Lindeman’s Frambois (a Belgian raspberry beer that is the nectar of the gods!).

The highlight of the evening was Xingu, a black Brazilian beer that to my pallet tasted like roasted figs…and I love figs.

If you’re looking for a relaxing escape for a few hours or an evening, take a drive over to the Horse, grab a cold one and set yourself down in our glorious garden…heaven is that close.