The Reason Why I Live Here…

I was catering a political fundraiser on Swan River this past summer where many of the invited guests were long-time customers of the Horse resulting in a rather blurred line between being a hired service and just another attendee. 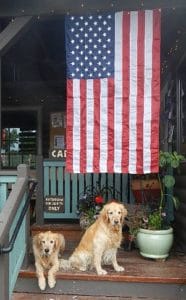 For some guests – those not my customers – the line was not blurred at all. They would not address me nor make eye contact; I was to them, just the hired help – invisible unless needed.  To be gracious, most of these folks were fairly new to the community, coming from metropolitan areas where class lines are more apparent and, I suspect, being held onto with renewed vigor as the ongoing recession brings those ‘with’ a little closer to those getting by ‘without’.

As the event matured and the provided banquet was rendered down to a few remaining (and wilting in the late afternoon heat) crudités, my catering attire was removed, the hair came down, and I became just another professionally dressed guest interested in the politics of the day.  Moving from one conversation cluster to another around the deck, I was now being introduced by friends to those very people who an hour before moved about me as if I were a cipher.

The handshakes; the eye contact; the ‘pleased to meet yous’ were all genuine, as were the brief but unmistakable contractions of the pupils and the slight furrowing of the brows that occur when one’s perspective of reality shifts.

This shift of perspective looms large among the reasons why I stay in such a small community when I obviously enjoy the activities and opportunities of big city life and exploring the lesser known areas of the world through my winter travels.  Although it wasn’t always so.

When I came here 13 years ago –  ‘dragged here kicking and screaming’ by my then partner who ‘just had to be in Montana!”- I justified the move with those trite and true plaudits of “clean air, clean water, open space, blah, blah, blah…”.  It has taken years and much growth to realize that although those might have been a few of the reasons for coming here, the reasons for staying are much more complicated because they revolve around the people more so than the place.

Thirteen years isn’t a very long time…a blink really, but for me it is a quarter of my life spent in one place. An unthinkable reality 14 years ago when a three year stint in an apartment or a job was considered long –term.  But as the years have moved inexorably onward I find myself caught up in the warp and weave of this tapestry that is the community of Bigfork extending defacto to Swan Lake.

The event on the river last summer offered up in a definitive moment what keeps me here – and in a word it is leveling.  This place has a strange power to level out society’s ‘haves’ and ‘have littles’ -or more accurately the ‘have differents”.

Like water seeking its own level, these folks that would not share anything in the big city, find themselves perhaps at first in some kind of commerce; whether it be firewood, water, grounds-keeping, boat maintenance, etc. But then both parties find themselves invited guests at a fete on the river; or dining next to each other at the Horse; or sharing elbow space and a beer at the Garden Bar.

I love introducing the retired multi-millionaire Republican building a 10,000 sq ft home on the lake to the Don’t Tread On Me man cutting firewood and living in a 600 sq ft cabin off the grid. Watching the interaction – first the commerce, perhaps of buying firewood, followed by the curiosity – of both parties. It is in this display of curiosity that the leveling begins as each begins to learn something of the other and to find respect for choices made, if not full agreement in the choices themselves. By making introductions and watching similar interactions over the years, I’ve learned that those that show no curiosity in the other generally don’t make it here, regardless of what side of the economic scale they are on.

Watching the transition of both sides – the leveling as it were – I can’t but marvel at how quickly we humans can adapt to shifting environments. And much like Darwin’s conclusions, those that won’t adapt simply disappear, or in the case of Bigfork, either put their property on the market and go back into the striated life from whence they came or truly disappear into the wilderness as self-sufficient as their explorer forbearers.

For those of us who stay, however, the rewards are incalculable.